Oliver and I went for a walk today to the 'Adventure Playground'. It's about 3km from our house, so a decent walk. 'Cause Oliver wanted to go there and play. 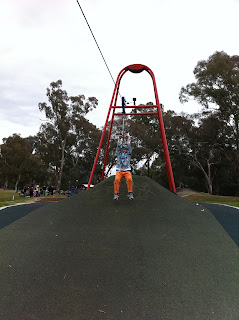 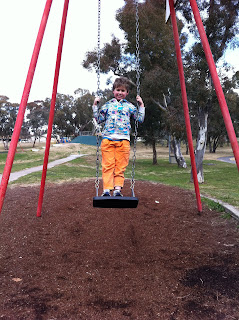 and a nice long slide, 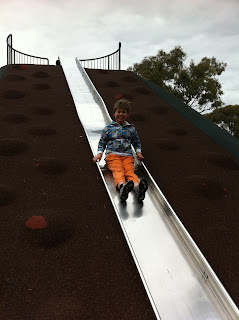 He had fun. But something's still missing.

The Adventure Playground has been around since I was a kid.But back then, the big slide was a big, high thing with only air underneath, not a bouncy soft fall. To get on the flying fox you had to climb up some bodgy tires and make a bit of a leap of faith. There was a great big rope swing, which sat next to a grandstand-like set of seats. The boys would all climb to the top and pile onto the rope, 10 kids at a time, and then swing higher than you would imagine anyone could go. There was also a cool wire bridge - just one wire suspended high above the ground, with a couple of extra wires for balance.

It was cool back then. There were big, high tree houses and a concrete slide that used to get covered in water in the summer. And one of those pods that spun around and around until everyone inside was well and truly sick.

Playgrounds have changed a lot since I was a kid. And not for the better, I don't think.

It seems that the agenda at the moment is to make everyone completely safe when playing - to the point that it's just not much fun to visit the park any more. I guess the kids don't notice, but that's because they don't know any different.

When I was a kid, there were lots of really high slides, that rocked when you climbed the stairs and were lots of fun on the way down. There were big wooden play structures that wobbled and dropped odd parts off periodically, and gave you a wicked splinter if you rubbed them up the wrong way. We had lots of fun climbing and jumping off - daring each other to ever more dangerous acts and timing ourselves as we raced around doing increasingly crazy things.

I may be paranoid, but I believe that the government (particularly the ACT government) is systematically removing every ounce of fun from our playgrounds.
Recently, they attacked our local park (the one out the back of our house), removing every tree branch that was within arm's reach (and there were some pretty awesome climbing trees), and they are in the process of 'revamping' a park near my parent's house. God only knows what they'll end up with. I think it will probably be a little plastic fort with a 1.5m slide and a distinct lack of fun, challenging playground fare.


It's not that I want to put my kids in danger, it's just that kids should have the chance to play, and climb and challenge themselves, and take risks. Maybe they'll break their arm, but then again, maybe they'll find out that they could do something they never though they could do. Am I wrong to think that a little 'danger' is better? Me, I figure that a kid can get in trouble anywhere (look at Sam - he died when he was in bed!), so surely they should be allowed some FUN!

TAMS (our local 'council') recently asked for our feedback on some of the playground spaces. I told them what I think. I hope a lot of others will too.  Our kids need the opportunity to play and be kids. Don't they?
Posted by Mel at 7:07 PM